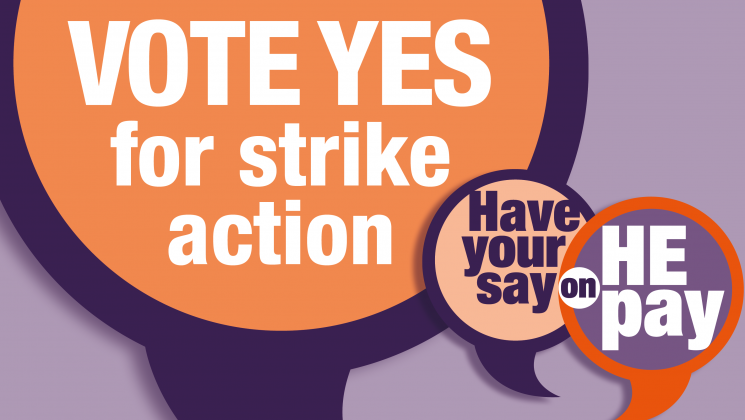 Have your say in the higher education pay ballot

Over the summer, UNISON ran a ‘consultative ballot’ of our higher education members. This informal ballot was to see what members thought of the employers’ national pay offer for 2018/19.

Over two thirds of those who voted rejected the pay offer and said they were prepared to take strike action to try and secure a better deal.

Your vote is vital. A new law means that at least 50% of members who are eligible to vote, must vote for industrial action for it to go ahead. Please vote and be heard.

How much has your pay fallen?

Update your details so that you receive your ballot paper.

Talk to your branch about meetings and the ballot process.

Be ready to vote yes to strike action to reject the employers’ offer in the ballot.

Ask your colleagues to join UNISON so they too have a voice.

Why you should reject the pay offer

The HESGE recommends that members vote for action for four main reasons:

It is a real-terms pay cut as inflation is higher than the offer.

We have had years of below inflation pay rises.

Our pay claim was much higher than the offer.

We want members’ pay to ‘catch up’ for the lost years.

The pay offer is more than has been offered in recent years. However, our pay claim was significantly higher to make up for the losses that have built up as a result of previous below inflation pay offers.

The 2.76% offer meets neither inflation nor our aspirations. In line with UNISON’s HE conference decision that the HESGE should reject any offer below our pay claim we are recommending that members vote for strike action.

The employers’ offer is:

Details of the 2018 trade union claim

National frameworks to close the gender pay gap and deal with precarious contracts (i.e. those on short-term or zero-hours contracts).

You can see there is a significant difference between what we think HE staff are worth and what the employers think. That’s why it is important that UNISON HE members vote for strike action and send a clear message to the employers to improve their offer.

The HESGE is finalising a timetable for the ballot. It is likely to start in mid-September. We will publish details shortly.

Remember, a high turnout in the ballot is essential, as by law we can only take strike action if we get at least a 50% turnout in an industrial action ballot.

It will be a postal ballot with the ballot papers going to members’ home addresses, so it is vital that your details are up to date.

Explore the range of courses and opportunities that UNISON’s learning and organising team offer.

See what events are coming up.

Get protection at work and a range of other benefits from just £1.30 a month.

We use cookies on our website to ensure you find the information you need in the simplest way. By continuing to use our website you are consenting to their use. Find out more about cookies and how we use them.